Enemies of the chickens 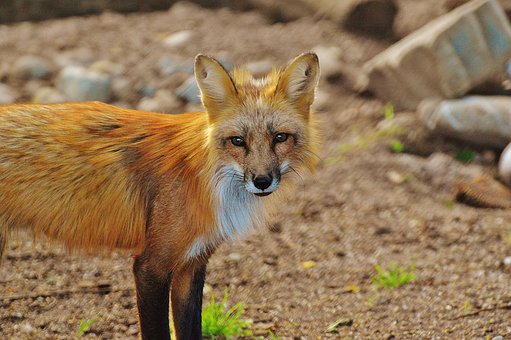 Predators
In the early morning hours, weasels, martens and foxes in particular can pose a great danger to chickens. This is especially the case in the rather barren winter months. In some regions outside of Germany, even bears can be attackers. Foxes in particular have a tendency to catch and kill all chickens. This behavior, which appears brutal, can be traced back to its prey instinct: chickens running around wildly, cackling loudly represent a great attraction that a predator can hardly avoid. Only when all the chickens have been killed do foxes start eating. They often take their prey with them to feed their young or to bury the chickens that have been killed.

During the day, birds of prey and even carrion crows can become a threat to chickens. Chicks, in particular, are a favorite food for numerous birds of prey. It also happens again and again that dogs and cats enjoy poultry. While some dogs interpret hunting and biting as a game, others actually want to kill and eat the prey. Even a "playing" cat can mean death for numerous chickens, especially chicks.

Protection for chickens
Trees, bushes and large stones are not only suitable hiding places for chickens, they also create a natural environment. Canopies also provide protection, which is particularly important for chicks and bantams. Young animals in particular should initially only be allowed into a covered run, as they lack the necessary experience to recognize enemies in good time and to be able to flee. Coarse-meshed nets protect against enemies in the air. If you also use yellow ribbons or reflections on glass for defense, your chickens are at least safe from birds of prey and carrion crows. However, only roofs made of wood or wire can help against hungry martens, who can easily climb onto stables and enclosures.

If possible, there should be protection on all sides, including on the floor. Some enemies can dig under a fence and get to the flock of chickens. To prevent this from happening, the fence should be sunk about 30 centimeters into the ground. It is even more effective if the entire floor is covered with wire underground. Alternatively, stone slabs laid out on the edge can also provide protection. Also note that martens can even get through fairly small openings. A marten will fit where your hand fits. As far as possible, you should therefore also cover larger holes and slots.

If you use wire, it should be galvanized aviary wire that is at least 1.2mm thick. Thinner wire can be gnawed too easily and does not offer sufficient protection against sharp marten teeth. A stable aviary wire is more expensive, but it offers reliable protection for years. Whoever keeps chickens is responsible for caring for and protecting them accordingly. In the wild there would be no fence to prevent chickens from fleeing if a fox attacks. But even if chickens may seem easy prey at times, they too have ways and means to protect themselves and their flock.

Natural protection
Usually the rooster takes on the role of protector. He warns his hens whenever there is danger. If there is no rooster in a group of hens, the highest-ranking hen takes on this important task. Chickens can not see into the distance very well, but with the help of their excellent hearing and vibrating organs, they can often perceive enemies at an early stage and warn the herd with certain sounds. The calls of the chickens sound different depending on the type of danger. Enemies from the air are commented on with a drawn-out warning call, enemies from the ground are announced with excited cackling.

Most of the time chickens flee, but depending on the situation, they can also attack. Roosters in particular can be dangerous if they want to protect their flock. A mother hen can also try to protect her chicks, but often has little success. When dusk falls, chickens seek shelter up high so that they cannot be eaten by enemies of the ground. A covered area with raised seating is the ideal place to stay for chickens.