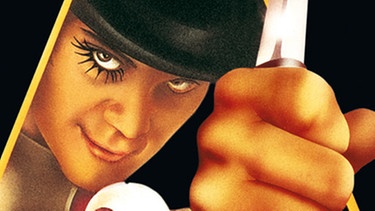 "Youth gangs do not respect common sense or the law!"
"The generations live in different worlds and speak different languages!"
"We have to look for new forms of rehabilitation of criminals!"
"Modern new districts are the haven of violence!"
"Representatives of pop culture use technology without thinking about sustainability!"
These and similar theses can still be heard today, but the ingenious director Stanley Kubrick dealt with them as early as the early 1970s. The film "Uhrwerk Orange" (Original: A Clockwork Orange) - based on the novel by Anthony Burgess - was released in 1972. "A Clockwork Orange" - shot in England - came out at the same time as British glam rock and looked like the optical equivalent of David Bowie, T.Rex and Gary Glitter. The film became a scandal because of its explicit depictions of violence, also because young people began to act out the story of the main character Alex and his gang, the Droogs, in real life. "Life imitates Art" wrote the Guardian and Kubrick voluntarily withdrew the film from circulation in the UK for 20 years.
Even today, "A Clockwork Orange" doesn't look like an oldie because of its garish pop aesthetic and its theme, but a vision that anticipated the explicit scene of rappers and ravers. In the program, various aspects of the book and the film are examined again: The language of the droogs, the youth craze that Alex's parents already live in, the post-Warholian aesthetic, but also the state's desperate attempts with a youth to deal with which it no longer reaches.
In addition to Stanley Kubrick, one of the greatest directors in film history, author Burgess, leading actor Malcolm McDowell and film composer Walter Carlos, who is now called Wendy Carlos, will also be honored. And the after-effects on real pop culture linger - from "Here comes Alex" from the Toten Hosen to bands like Heaven 17, Moloko, Devotchka and Campag Velocet. Repetition from January 3rd, 2011