Perpetrator Analysis - This is the average burglar

If you think of a typical burglar, you first imagine a dark-clad man who, covered with a black mask and armed with a crowbar, tries to break into residential or commercial premises during the holiday season in the evening or at night. But this stereotypical notion does not quite correspond to current developments.Using various statistics and figures, we would like to visualize in our perpetrator analysis what the average burglar looks like, how he gains access to private apartments or company premises and when, how and where he allows a break-in to occur.

This is the average burglar

At the beginning we want to anticipate one thing: The There are no burglars. Because the perpetrators have different motives, backgrounds and opportunities. On the basis of relevant statistics, however, an approximate average can be derived, which can be used here for classification. The 2016 Burglary Report of the German Insurance Association (GDV) already paints a clear picture of this: the average burglar, at around 27.5 years of age, is quite young and rather male. Almost 60% of the suspected burglars are of German origin and about the same number are registered as unemployed. Burglaries are often not carried out alone, but with accomplices. Amazingly, over 40% of the perpetrators are acquaintances or friends of the person concerned, i.e. from direct circle of acquaintances, such as ex-partners, relatives or life partners.

About the typical There is not much to say about the clothing of a burglar, because of course there is no uniform identifier. However, it is clear that burglars try to camouflage themselves through normality. Because only if they are not noticeable during the day and in a normal crowd does the clothing contribute to the success of the crime. The following graphics are intended to show what the percentage distribution looks like for the characteristics of age, gender, marital status, origin and professional status. In order to get a clear overview and to simplify the presentation, we reduce theTotal number of intruders per 100 perpetrators and show the percentage distribution. The following picture emerges:

80% of the burglars are male, 20% of the perpetrators are female.

66% of burglars are single. Almost 20% are married

60% of the burglars in Germany are German, 40% are foreigners.

Around 58% are unemployed during their act, only around 19% of the burglars are employed.

In addition to classic characteristics and demographic data, the statistics collected can also be used to draw conclusions about the procedure to be followed in the event of a break-in. The Lower Saxony Criminal Research Institute interviewed burglary victims (n = 2,403) about the crimes and generalized the data collected.

According to the interviewed burglary victims, 61.5% of the burglaries were rated as accomplished acts with intrusion into the living space, 38.5% were classified as attempted acts. The survey does not reveal why the individual cases remained with one attempt and whether mechanical or electronic burglar protection contributed to this.

The following graphic gives an overview of the days of the week on which the break-ins took place. It is noticeable that Friday is the front runner of the days when there is a break-in. In the late afternoon and early evening in particular, there are targeted break-ins while residents are out and about, thinking about the weekend, doing shopping and planning their free time.

Nevertheless, in around 13% of the burglaries analyzed, the victims were present in the living space at the time of the crime, so that the perpetrators were not alone during their crime. 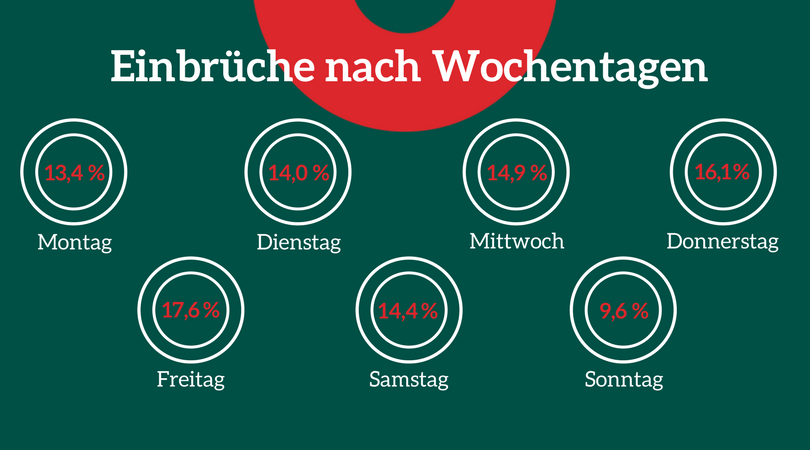 In more than 67% of the cases, multi-family houses with more than two single parties were broken into. This high rate is actually astonishing, as one assumes that the sheer number of apartments and residents already has a relatively deterrent effect for fear of being seen or recognized. Far after that, however, there are only single family houses. This was only broken into in 27.2% of the cases. Two-family houses (3.2%) or other living spaces (2.6%) were least affected.

Burglaries in apartment buildings with more than two apartments

Break-ins into two-family houses or other living spaces

How the intruders get into the affected property cannot be determined in a general manner. With around 51.8%, doors are almost as often affected as break-ins as windows with 48.8%. Protection is therefore required at both sensitive weak points, which can prevent the break-in or at least make it significantly more difficult.

Regardless of where the perpetrators get into the living space, it becomes clear when looking at the burglary statistics that the vulnerabilities affected could be bypassed in more than 56% of the cases by levering the mechanism. Far behind, other types of procedure follow, such as smashing glass, using tilted windows or doors, drilling open lock cylinders, and many more. In some cases the deed could even be carried out without any recognizable traces.

In the rarest of cases, it is possible to specifically identify a break-in tool as such. In the exemplary survey, this was only possible in 298 cases. However, if the tool used by the perpetrators can be named, it becomes clear that a simple screwdriver was used in 42.6% of the cases.

Stolen property in the event of a burglary

If the burglars manage to break into the living space unnoticed, they will of course also want to steal the booty. When the burglary is complete, jewelry and watches in particular are among the most sought-after stolen goods (57.5%). Nevertheless, cash is still in great demand. At 48.6%, cash holdings are the burglars' second most important target. However, digitalization and technical developments are also promoting small electronic devices such as tablets, smartphones or cameras as coveted potential stolen goods (31%). Larger entertainment electronics such as game consoles, high-quality televisions or hi-fi systems are of course more difficult to steal, which also shows a relatively low rate of 16.7%.

Where caution is required: Absolute break-in numbers at a national overview

The General Association of the German Insurance Industry (GDV) has published interesting figures on nationwide burglary statistics in its 2016 burglary report, which also allow conclusions to be drawn about the behavior of burglars. The overview map shows the number of burglaries in private living spaces in Germany in 2016 at an absolute higher level, commercial burglaries are not yet included. Here it quickly becomes clear that North Rhine-Westphalia is the unattainable frontrunner with over 52,500 burglaries. Baden-Württemberg took second place with 11,095 burglaries. However, if you extrapolate the number of burglaries to the number of residents, a completely different picture emerges. With 459 burglaries per 100,000 inhabitants, Bremen is clearly in first place in a relative analysis.

These 3 types of perpetrators can be identified

The BHE Bundesverband Sicherheitstechnik e.V. has categorized the actions of the perpetrators in the event of a break-in and thus worked out perpetrator profiles that allow intruders to be classified into three types of perpetrators.

The opportunity burglar is the type of perpetrator who is likely to be encountered most frequently. An average of eight out of ten acts are committed when opportunities arise spontaneously. Because of this spontaneity, the occasional burglar often shows up with only limited experience and knowledge in the act. Often the perpetrators try to use the carelessness of the victims and act in the protection of anonymity. It is therefore not surprising that only simple objects are used as tools in the event of a break-in. With a well thought-out electronic and mechanical burglary protection, the spontaneous attack can often be prevented in such cases, because the occasional perpetrators rarely dare to go to sensitively secured apartments.

In contrast to the casual burglar, procurement criminals have a significantly greater experience with break-ins and aim at the procurement of cash or other assets. It is not uncommon for them to be forced to break in regularly in order to finance debts or addictions with their prey. It is therefore not surprising that a relatively high proportion of burglars were under the influence of intoxicants in their acts. However, this also makes the perpetrators unpredictable and often dangerous for the burglar victims.

The name of the third perpetrator profile already speaks volumes: professional intruders are experienced perpetrators who plan their course of action carefully and meticulously. The course of action is consistent, calculating and long-term. Even before the break-in, the conditions at the property are considered on site and possible escape routes are selected in the event of an emergency. This meticulous procedure is often organized by entire burglar gangs who incorporate professional equipment and sometimes even specializations. Since professional intruders know exactly where to get something, they try to prioritize large apartment buildings, villas or lucrative business premises. You can only protect yourself against such professional break-ins with high-quality burglar protection. 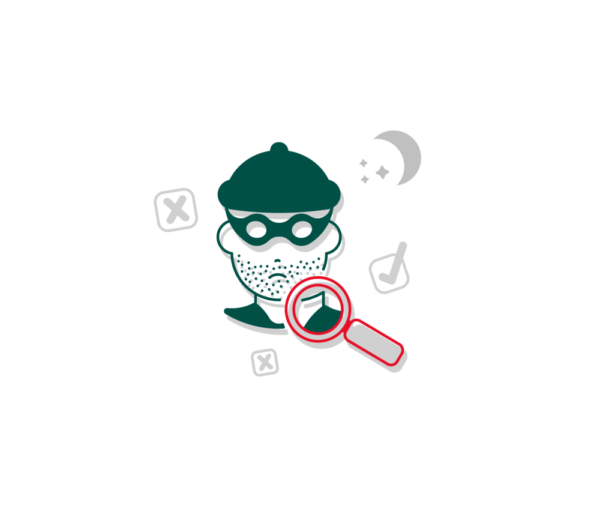 The characteristics of an average burglar presented here are of course purely statistical. How individually and differently burglars proceed in their act, however, only becomes clear after a break-in has occurred. Nevertheless, with this knowledge and a healthy amount of caution, you can take measures before a break-in so as not to become a victim yourself.

Anyone who has a clearer idea of ​​the average burglar from our explanations should now know how effective mechanical burglar protection solutions and alarm systems can help protect against a break-in. Because only security solutions that really prevent or interrupt every type of burglar are effective. A 24-hour, seamless surveillance should be the measure of all things in the private as well as in the commercial sector if you really want to protect your belongings effectively against break-ins, theft and vandalism.

The typical image of a burglar in black clothes and with a mask is long out of date. Various burglary statistics can be used to show what the average burglar is like, how he proceeds and what he is aiming for. It becomes clear that especially young, single men between 21 and 34 years of age and without employment become perpetrators. With regard to the approach to the crime, it can be seen that Thursday, Friday and Saturday are the days of the week that are very popular with burglars. In more than 67% of the cases, apartments in apartment buildings are the target. The way in which the living spaces are penetrated is fairly evenly distributed. However, jewelery and watches as well as cash stand out as coveted stolen goods. Ultimately, a certain type of burglar with different degrees of professionalism can be deduced from the burglar's approach. Regardless of the case, one thing is always clear: With effective burglary protection and 24/7 monitoring, burglaries can be delayed, interrupted or even prevented.