This is why the connection is worthwhile: Why do I need fiber optics? 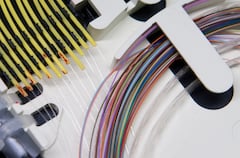 Fiber optic: That's why the connection is worthwhile
Image: dpa The fiber optic is the Internet access of the future. Politicians and communication providers agree on this. But despite all the dreaming of the gigabit society, the real existing Internet connections are far from it. In large parts of Germany, households without cable connections and fiber optics are dependent on telephone lines. With a bit of luck this will be enough, but especially in more remote areas or small towns there is often only a snail's pace.

If fiber optic network providers then advertise expansion campaigns, this often creates hope for fast network access. Homeowners just as often have many unanswered questions. Here are answers to some of the most important of them:

What makes fiber optic better than TV cables and copper?

Fiber optic: That's why the connection is worthwhile
Image: dpa The DSL connection via copper cable simply does not create that much data throughput. The current limit is around 250 megabits per second. And the connections rarely reach these maximum values. The TV cable can do more, individual providers promise up to one gigabit per second. The problem: The TV cable is a shared medium. So if many users are connected and active, none of them get the maximum.

The situation is similar with radio data transmission via LTE. If many users are active in a radio cell, the capacity for each one drops. Radio traffic is also more susceptible to interference.

When it comes to fiber optics, providers promise more reliable connections, more speed and shorter response times. The 2018 annual report of the Federal Network Agency shows around 1.1 million fiber optic connections into the building or to the network termination point (FTTB / FTTH).

How does the fiber get into the house?

That depends on the location and existing lines. The simplest case: there are already empty conduits from the connection shaft on the street into the house. Then the fiber can simply be laid through it. If you are building or renovating, you can already work ahead and save later.

If there is no empty conduit, according to the Breko fiberglass association, the cables can get through the garden floor to the wall of the house, for example with an earth rocket or a flushing drill. The glass fiber is laid above ground to the ground floor or through the cellar wall into the cellar and connected to the network termination box.

This closed laying method works in most cases. A trench only has to be dug if there are larger obstacles such as rocks in the way.

What does it cost me?

That cannot be said across the board. Some providers lay the line free of charge, explains Breko consultant Frederik Palmer, while others ask for a fee. In some follow-up campaigns, providers lure homeowners who commit themselves early on with favorable conditions. Whoever jumps on the train later pays a little more. Still other providers make the relocation dependent on booking Internet access via fiber optics for a certain period of time or only relocate to the property line.

Shortcoming: Often a certain proportion of households willing to connect must first be reached in a locality, around 40 percent, before construction work can begin.

The monthly prices for Internet access via fiber optic do not differ much from other wired access. The faster the connection, the higher the price. A connection with a maximum of 100 Mbit / s costs an average of 45 euros per month, for the gigabit Telekom and German fiber optics cost around 120 euros per month.

What are the pitfalls?

"Anyone who can get fiber optics should get them," says lawyer Boris Wita from the Schleswig-Holstein consumer advice center. But vigilance doesn't hurt.

Example connection costs: Here, homeowners should have all items well calculated. Some utilities only lay the lines up to the property line free of charge. If the house is far from the garden gate, the rest of the installation can be expensive. Not to mention possible trouble with sloppily working civil engineering companies.

Sometimes the connection and termination dates of the fiber optic and the previous provider do not match. In the worst case, customers then pay twice until the old contract expires. Wita advises: "Have the new provider confirm in writing that he will pay for follow-up costs due to the overlapping of contracts." Some providers step in here and give, for example, credits for the period of the double payment.

Which is better - participation in follow-up campaigns or individual connection?

Basically, says Frederik Palmer, participating in such connection campaigns is always cheaper than later individual connection. This often also applies if a booked internet tariff is initially concluded via the fiber optic connection with the connection. If you want to retrofit the house later at your own expense, you will pay significantly more.

Also possible: If you decide against the connection, in the worst case you will prevent the entire fiber optic project in small towns if not enough interested parties come together. It can happen that providers and local politicians clean the door and sometimes put pressure on them, reports consumer advocate Wita.

In rural areas in particular, however, such relocation campaigns can be a much faster way to get a broadband connection instead of waiting for Telekom to upgrade the copper network.

I don't need that fast internet, do I?

"You should see that as an investment in the future," says Breko man Palmer. Perhaps the existing 6, 16 or 50 Mbit / s is still sufficient today. But with more and more networked devices and video streaming in high resolution, the copper lines will soon reach their limits. Homeowners with families or those who wish to do so should plan for a higher demand.

Last but not least, there is currently a lot in motion when it comes to video games. More and more cloud gaming offerings are coming onto the market. The games run in data centers, players only stream a video image of it home. This also requires very powerful and stable data lines.

What else do I get out of it?

"Some houses can sometimes only be sold as a result," says Corinna Kodim from the owners' association Haus & Grund Germany about the fiber optic connection. Older houses in particular or those in rural areas can increase in value thanks to a modern data connection. According to Haus & Grund, sales prices are between five and eight percent higher. Apartments with fiber optic connections can also be rented out more easily.

After the house connection, the building should continue at high speed and not over lame copper cables. In a guide, Telekom gives tips for laying fiber optics in the house.